Autistica wanted to develop a new donor acquisition programme and online was considered the best channel to begin with. Investment was lower than either direct mail or DRTV and testing could be carried out fairly easily.

Further, working with a telephone fundraising agency, the leads could be converted into monthly direct debit gifts for more sustainable income.

A series of creative executions was developed to test across social media channels, particularly Facebook. 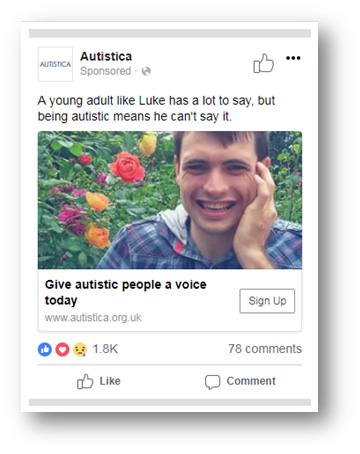 Critical to the success of this campaign was the subsequent donor journey.

A series of email follow-ups to the campaign which continued to talk to all of the interested people who had signed up. As well as telephone leads, email address leads were gathered.

The telephone fundraising agency called the [consented] telephone numbers and had an 18% conversion rate. Unusually high due to the nature of the campaign and the ability to target people so well through Facebook.

We are happy to share more details of this campaign [and others like it], but due to client confidentiality we are only able to share limited aspects of the campaign here.

Critical to the success of this campaign was the subsequent donor journey.